The Kondratieff (aka Kondratiev “K” Wave) aka The Long Wave Cycle

The current long wave is of the long variety and began in 1949. Market cycle activity indicates that the K Wave that began in 1949 will end in 2020. A powerful new K Wave spring season is coming once we get beyond the current global financial and economic crisis.

The late renowned Harvard economist Joseph A. Schumpeter, author of the book Business Cycles; A Theoretical, Historical, and Statistical Analysis of the Capitalist Process, believed that the economic long wave is the single most important tool for economic prognostication, and therefore is the starting point for any relevant and useful financial market analysis, MCD concurs. Like Shakespeare, you likley recognize that there are powerful cyclical forces at work in human affairs.

“There is a tide in the affairs of men.

Which, taken at the flood, leads on to fortune;

Omitted, all the voyage of their life

Is bound in shallows and in miseries.

On such a full sea are we now afloat,

And we must take the current when it serves,

Or lose our ventures.” 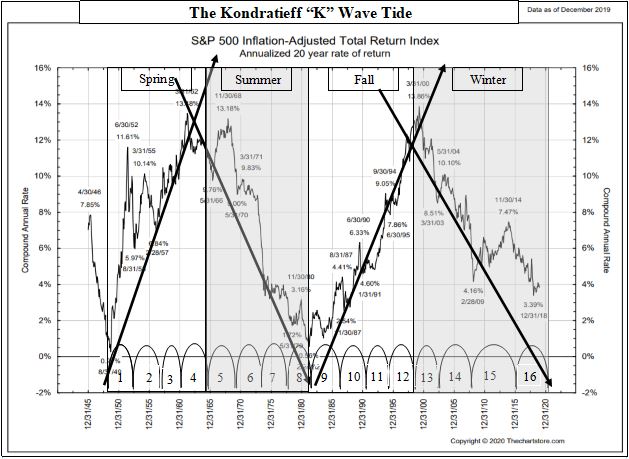 The Kondratieff long wave alone does not provide an effective formula timing plan for investors and traders. However, the Long Wave Dynamics approach offers a powerful set of tools for market analysis and investment decision making. For detailed information on the long wave and its impact on the global economy and financial markets, please read The K Wave, Profiting from the Cyclical Booms and Busts in the Global Economy, Update and Expanded Edition eBook (1995), and subscribe to The International Market Cycle Dynamics Letter.